Today, legendary musician Bob Mould announces rescheduled dates for his upcoming Solo Electric 2022 UK and Ireland tour, which now begin on June 9th at Brighton’s Concorde 2. The tour, originally scheduled for Jan/Feb 2022, has had to be temporarily postponed due to the ongoing Covid-19 pandemic.

In a new statement to fans, Mould writes:

“As I mentioned last fall, I’m always concerned about the safety of my audience as well as venue workers. In early December 2021, I realised it would be difficult for me — even with three vaccinations on my dance card —  to stay Covid-free for the entirety of the January/February 2022 IE/UK Solo Electric tour.

“Today, I’m happy to announce those shows have been rescheduled. Full dates are listed below. All tickets remain valid. Refunds can be available at your point of purchase.

“Apologies in advance for any inconveniences. Lots of moving parts had to be re-positioned before announcing these new dates. With that being said, I’m hopeful for a better 2022, I’m anxious to get back to work, and I’m very excited to see you all this June!”

As Mould notes above, tickets previously purchased for the original shows remain valid across the board but for those unable to attend the rescheduled shows in June and July, refunds are available at their point of purchase. Please see further below for a full updated itinerary.

The shows – which include a new London date at Islington Assembly Hall on June 16th – will find Mould performing solo versions of music from across his iconic, 40+ year career, including songs from the lauded Distortion retrospective collection, from his landmark band Hüsker Dü and from 2020’s explosive and critically acclaimed Blue Hearts album. As Mould previously noted: “I’m looking forward to the upcoming Solo Electric shows in the UK and Ireland. I’m excited to be performing songs from 2020’s Blue Hearts, as well as revisiting the prior 40 years of my songbook.”

Tickets for all shows available at https://bobmould.com/tour/ 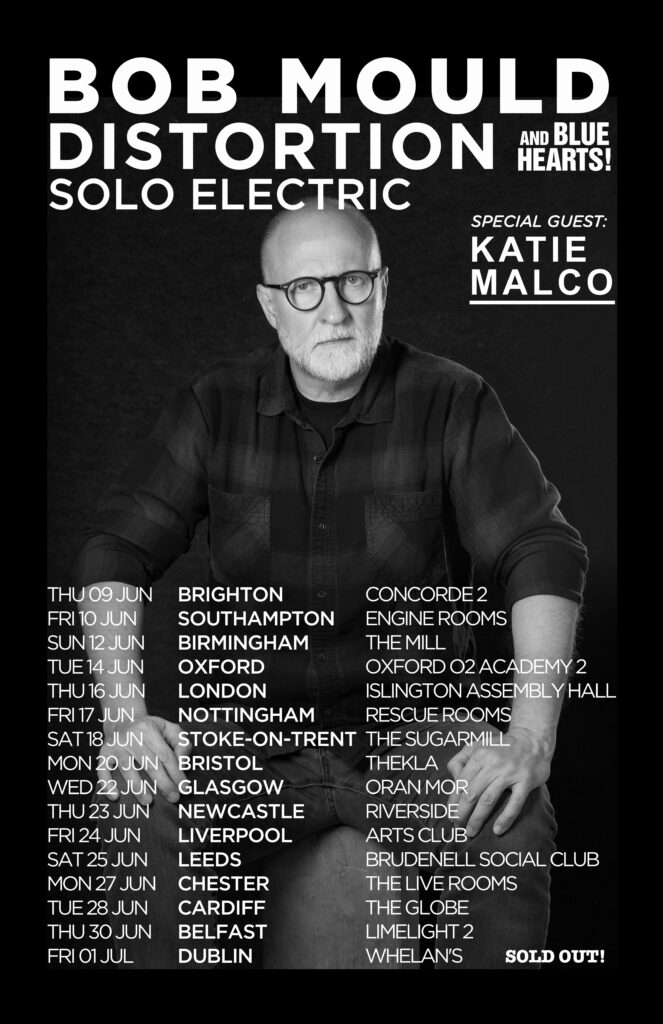