WATCH THE VIDEO FOR SOUND ON SOUND HERE

On January 22nd, 2021, Demon Music Group will release Distortion: 1996-2007, the second of four vinyl boxsets chronicling the solo career of legendary American musician Bob Mould. It follows hot on the heels of the recently released 8LP Distortion: 1989-1995 boxset, which took in Mould’s early solo outings as well as his records with the much-beloved Sugar, and the 24CD Distortion: 1989-2019 box, which covers the entirety of his post-Hüsker Dü output. 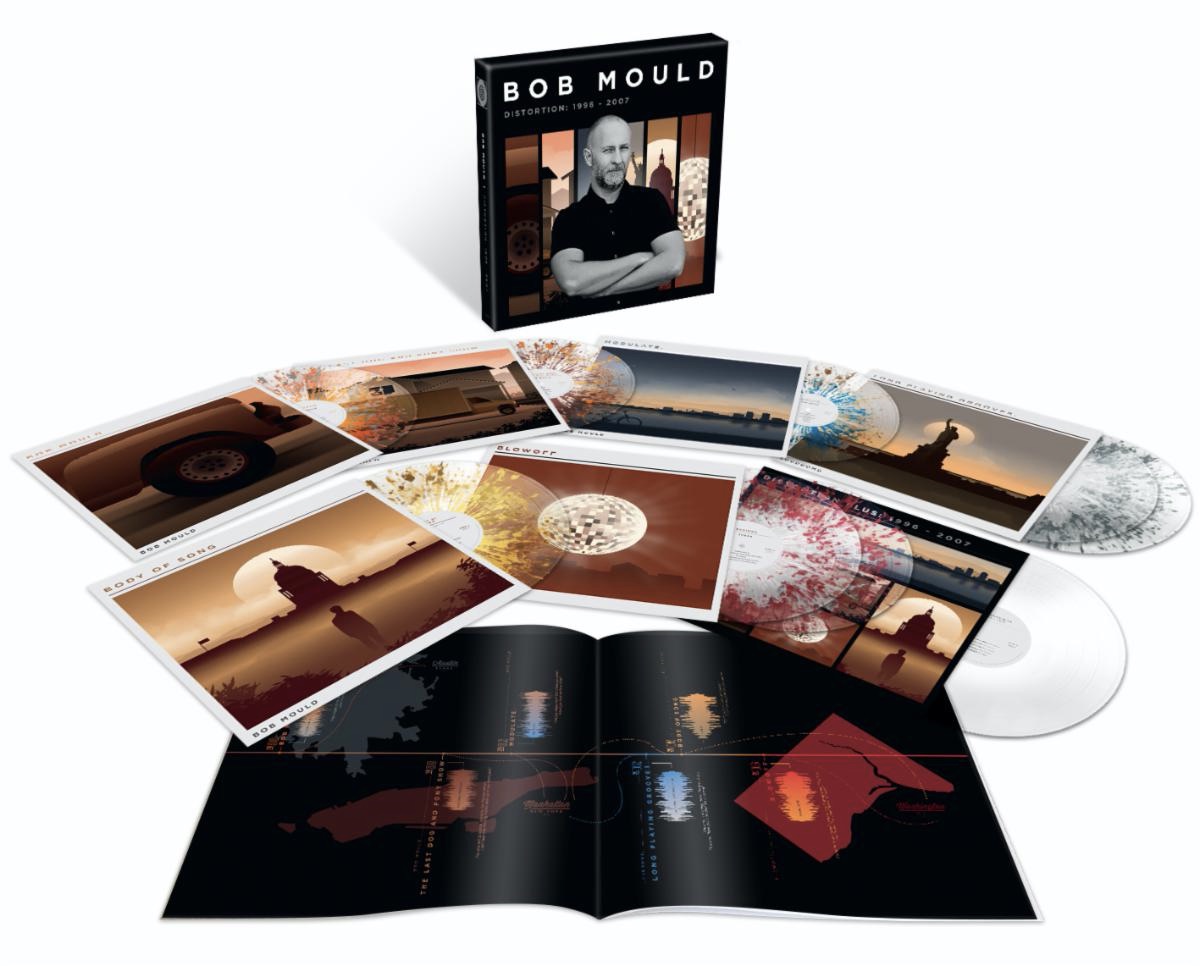 As with the previously released Distortion: 1989-1995, each album in the set has been mastered by Jeff Lipton and Maria Rice at Peerless Mastering in Boston and is presented with brand new artwork designed by illustrator Simon Marchner and pressed on 140g clear vinyl with unique splatter effects. The boxset includes a 28-page companion booklet featuring liner notes by journalist Keith Cameron, contributions from Death Cab For Cutie‘s Ben Gibbard and Best Coast‘s Bethany Cosentino, lyrics, memorabilia and much more. An exclusive indie edition limited to 750 copies worldwide also includes a 12″x12″ screen-print of the new modulate. album cover hand signed by illustrator Simon Marchner and Mould himself.

“It’s called Distortion because it describes the music and it fits the world we live in,” says Mould of the boxsets. “In this new age, everybody shares their life in real time. But I’m not done yet. If I didn’t have a constantly active career, this anthology might feel like the proverbial dirt landing on top of my coffin — though somehow I seem to be able to crawl my way out of the dirt every time!”

2021 will see two further vinyl Distortion boxsets covering the years 2008 to 2019 rounding out a year-long celebration of one of the most storied, creative and consistent voices in the American underground. As Cameron offers:

“In 1989, Bob Mould was already a renowned figure, thanks to his trailblazing work with Hüsker Dü: the Minneapolis trio which refracted ’60s pop melody through the discord of hardcore punk, creating a new language that Pixies and Nirvana would subsequently teach the world to sing. With his debut solo album Workbook, however, Bob Mould amazed his audience with its pastoral beauty and contemplative tone.

“It would be the first in an ongoing series of artistic transformations, each profoundly shaped by Mould’s sensitivity to his environment. In 1992, he formed Sugar, a band whose debut album Copper Blue earned both critical plaudits and a long overdue popular dividend. Just three years later, with Sugar at its commercial peak, Mould ended the band and made a self-titled solo record mapping the most nakedly personal path down a road already hallmarked by unsparing self-expression. He shocked then confounded fans by announcing his retirement from rock music in 1998 and re-emerging in the new century as an experimental electronica artist and successful DJ, whose club night Blowoff became a phenomenon across the US. By the end of the ’00s, Mould had found a harmonious accommodation between his musical selves, and in 2012 released the catalytic Silver Age, made with his latest power trio configuration, and heralding a resurgent decade. A succession of albums up to 2019’s Sunshine Rock followed, each one a real time/real life distillation of fearless artistic vision and a master craftsman’s skill.”

Discover more about the boxsets including full tracklistings and FAQs here: